Ever wonder what goes on behind the scenes in the campaign to win approval for a 48 million ton coal export terminal at Cherry Point?  Many of those efforts are not in view of the public, but can come to light via public records requests related to various components of the proposed Gateway Pacific Terminal (GPT) project.

Public records requests placed to the Ferndale School District and the City of Ferndale government and staff relating to GPT provided the opportunity to review records that revealed some interesting information.

To name a few of the local elected officials and public figures involved in lobbying support for GPT with relevance to this story, here is the short list:

One of the avid GPT promoters (shall we say pro-GPT activists?) listed above, Ken Oplinger, sent an email letter dated June 21, 2012 to Ferndale School District Superintendent Linda Quinn.  The subject of Oplinger’s email letter was a May 8, 2012 letter written by then-School Health Officer and Director of Special Services for Ferndale School District Dr. Michael Berres, Ph.D, sent to 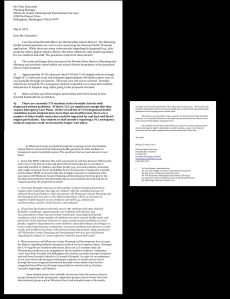 Tyler Schroeder, then-Planning Manager at Whatcom County Planning and Development Services (PDS). Whatcom PDS is one of the co-lead agencies for the State Environmental Policy Act (SEPA) review of the proposed GPT project. Dr. Berres’ letter contained questions about potential health impacts to Ferndale School District students which could result from the proposed GPT project if it were built.

In Oplinger’s email letter to Ms. Quinn, he strongly criticized Dr. Berres’ letter to PDS.  Oplinger said he found “the substance of the letter and the tone of the letter to be biased against the proposal.”  He chastised Dr. Berres for having written in his letter that, “At this point, the County’s explanation of how the various health factors will be fully and substantially addressed in the scoping process seems weak.”

Oplinger stated in his letter, that Dr. Berres “calls into question the ability of Whatcom County

Planning to manage this process, and uses inflammatory language, including referring to the County’s comments about fully and substantially addressing health factors of the project as, ‘weak.'”

Oplinger also claimed that Dr. Berres provided “erroneous information that has been pitched by overt opponents of the project,” in his letter.  There were no specifics provided by Oplinger as to what he considered erroneous, nor any evidence to support that general claim.

In further examining the records, it turns out that Oplinger was not the only person contacting Ferndale School District about Dr. Berres’ letter to PDS.  In a June 25, 2012 email from Dr. Berres to Superintendent Quinn, Dr. Berres had prepared a sample draft response for Ms. Quinn to send Oplinger.

In that draft, it indicated that two days prior to Superintendent Quinn receiving Oplinger’s email letter, she had “received telephone inquiries from Mr. Cole’s office suggesting that the Ferndale School District is ‘circulating a letter of opposition’ to the Gateway Pacific Terminal proposal.”  However, Dr. Berres clearly stated in his May 8, 2012 letter to Whatcom PDS that, “This letter is not intended to take a position on the Gateway Pacific Terminal proposal. It is intended, however, to ask important questions that our District must have answered through the scoping process.”

Dr. Berres suggested in his prepared draft response for Ms. Quinn that Ken Oplinger’s time would be better spent, “insisting that the County’s scoping process include an exhaustive analysis of health factors,” rather than “criticizing District staff for fulfilling their duties.”

Oplinger closed his letter to Ms. Quinn saying, “In addition, I would like Dr. Berres to provide questions to Whatcom County Planning that would also provide information on issues like the number of children that would be raised from poverty by this project, the additional health programs or services the Ferndale School District might provide with additional funding from the property tax increase the project would provide, and other questions that might show a more even handed review of how the project might impact the children and staff of the Ferndale School District.”

In the records obtained, there was no record of any written response from Ms. Quinn sent to Oplinger.  When Ms. Quinn was contacted via email about that response, she replied in an email saying, “After thinking over the situation and talking to Dr. Berres, I decided NOT to put anything else in writing. There was not written reply.”

about Dr. Berres’ May 8 letter sent to Whatcom PDS.  Cole sent a June 22, 2012 email to Jensen which included an attached copy of Berres’ letter, the existence of which, Cole said, he “was given a heads-up about by a shool [sic] board member.”

Cole said Berres’ letter seemed “to reflect some biased and distorted perspectives on the project and EIS review process.”

If Cole “was given a heads-up” by a Ferndale School Board Member, why was a school board member alerting SSA/GPT consultant Cole about the existence of Dr. Berres’ letter?

In his June 22, 2012 email to Mayor Jensen, Cole went on to say: “The District’s letter is not based upon thoughful [sic] inquiry and it ignores exploring the potential benefits to the District and its citizenry.  For example, general properity [sic] benefits evryone [sic] in reducing poverty andthe [sic] need for subsidized public services like school meals.  As well, a major additition [sic] to the tax base woould [sic] allow bond and levy assessments to occur at less cost to each taxpayer.”

Cole closed his email, asking Mayor Jensen if he had any advice on this matter, saying that they [SSA/Cole] would like the district to have a full range of information, “based on facts and science.” Mayor Jensen responded the next day in an email saying he was out of the country and when he returned after July 5, he would talk with Cole, and then with Linda Quinn.

One week later, according to a June 29, 2012 email from Cole to Mayor Jensen, Cole told the mayor he had a conversation with Superintendent Quinn. 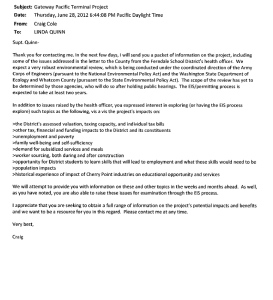 Cole had sent a June 28, 2012 email to Superintendent Quinn thanking her for contacting him and saying that he would be sending her a packet of information on the project, including some of the issues addressed in the letter to the county from Dr. Berres.  He added that, “We expect a very robust environmental review. . .”

If, in fact, Cole expected a very robust environmental review, then why is Cole questioning anything that Dr. Berres wrote in his letter to Whatcom PDS?

One month later, on August 31, 2012, Cole sent an email to Sherri Huleatt, GPT Communications Coordinator who worked with him, asking her: “Could you see if Gary would be willing to host a meeting with the three of us to provide Quinn with an intro to the project?”  That same day, Sherri Huleatt sent an email to Ms. Quinn, saying that Mayor Jensen is hoping to schedule a meeting along with Cole in order to give Ms. Quinn “a briefing” on GPT and answer any questions she may have about the project.

In reviewing Dr. Berres’ May 8, 2012 letter to Whatcom PDS, his approach seems to be one of laying a foundation for each of the school district’s questions and then posing those questions about the potential adverse impacts and health effects to Ferndale students; in other words he was providing the reasons why the questions he was asking the agencies (tasked with the environmental review for the proposed GPT) mattered to the students, teachers and parents in the Ferndale School District.

The importance of the foundation laid for questions and concerns in scoping comments submitted for the Environmental Impact Statement (EIS) for GPT is evidenced when reading through scoping comments entered into the EIS record.  For example, the small city mayors of Whatcom County submitted an EIS scoping comment for the proposed GPT on November 29, 2012 which all the six small city mayors signed, and which Lynden Mayor Scott Korthuis delivered verbally in the public testimony period that same day at the Ferndale EIS scoping hearing.  That comment included information explaining the significance of why they were asking for their particular remarks to be considered.  Those remarks related to economics, industry, jobs, wages, etc.  There were no specific questions in their scoping comment asking the EIS agencies to consider the reasonably foreseeable and/or potential adverse health and environmental impacts from GPT on the communities which the mayors serve. 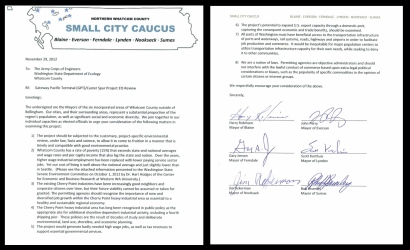 The May 8, 2012 letter from Dr. Berres to Whatcom PDS contained detailed information starting with four statements which laid a foundation for his questions.  In number 4 he wrote this:

“There are currently 574 students in the Ferndale Schools with diagnosed asthma problems.  Of these, 221 are significant enough that they require Emergency Care Plans.  Of the overall list of 1754 diagnosed health conditions (some students have more than one health issue), there are a number of other health issues that could be impacted by coal dust and diesel engine particulates.  Any student or staff member requiring a 911 emergency medical response could  be harmed by longer wait times.” (bolded text is in the letter)

Dr. Berres then asked four questions to PDS in his May 8, 2012 letter.  The questions all had background details showing the reasoning as to why Dr. Berres posed those questions.

Question number 4 was this:

“What assurances will Whatcom County Planning and Development Services give the District regarding delayed emergency medical service response times?  Amongst the 1754 significant student health needs, there are 125 students with Life Threatening conditions (e.g., anaphylactic shock, diabetes mellitus).  Ambulance crews from both Ferndale and Bellingham fire stations currently transport students and staff from Ferndale Schools to St. Joseph’s Hospital.  In order for an ambulance to not cross the tracks during an emergency response, it would need to travel through the more-congested downtown Ferndale routes rather than the less-congested Portal Way on/off ramps (especially for schools such as  Horizon, Cascadia, Eagleridge, and Skyline).”

In the Ferndale school district’s November 24, 2012 official EIS scoping comment for GPT, question number 4 was this:

“What would be the impact of delayed response times from emergency medical responders on the students and staff of the school district?  There were 125 students in the district last June with life-threatening medical conditions.  This same question is now being addressed by the City of Seattle (November 6 ‘Seattle Daily Journal of Commerce’).”

Timeline of events documented by emails leading up to the submission of Dr. Berres’ scoping comment for the GPT EIS

Comparing the Ferndale School District’s official November 24, 2012 EIS scoping comment for GPT to the May 8, 2012 letter Dr. Berres sent to Whatcom PDS, the differences are very noticeable. Almost all of the foundation from those original four questions is missing in the school district’s November 24, 2012 EIS comment.  What is unknown is why that happened.

What we do know is:

In Dr. Berres’ prepared draft response to Cole (which was never sent), he expressed his displeasure with Oplinger’s fault-finding letter to Superintendent Quinn, and he tried to uphold his responsibility to the district’s students.  Dr. Berres wrote this in his draft response to Oplinger:

“I’m sorry that you feel asking questions about the health of our students is ‘biased’ and ‘inflammatory.’ I feel differently.  In fact, to not ask such questions would be a dereliction of our responsibility to our students.”