At the September 27, 2016 Whatcom County Council meeting about 70 people testified during the Public Hearing for the ordinance imposing an interim moratorium (6 months) on the acceptance and processing of applications and permits for new or expanded facilities that would facilitate the increased shipment of unrefined fossil fuels out of Cherry Point.

One of those 70 people was Tony Larson, President of the Whatcom Business Alliance (WBA). The WBA has been a big advocate for the proposed Gateway Pacific coal terminal since the business advocacy organization was founded in 2012, leading into the EIS scoping period for the GPT project. “Gateway Pacific Terminal” is listed as a Presidents Club Member on the WBA website. WBA Presidents Club members pay $5,000 annually for that top level WBA membership. One of the listed member benefits for that top level membership is: “24/7 meeting on demand with WBA President.”

Just wondering, does that level membership also include the WBA President testifying to County Council in opposition, or in support, of issues that impact WBA member companies?

In his testimony to the Council against imposing the ordinance for the interim moratorium, Larson said that an attorney, on behalf of the WBA, had sent a letter that day (September 27th) to Whatcom County Civil Deputy Prosecuting Attorney Karen Frakes, claiming that the then-proposed (now approved) Ordinance 2016-039, imposing the 6-month temporary moratorium “may be unconstitutional due to discrimination against interstate or foreign commerce.” The letter claims the ordinance, “may be an unconstitutional attempt to regulate foreign commerce by attempting to control commercial activity beyond the county’s borders,” and it goes on to claim that the ordinance “may be” in conflict with other Washington state laws cited in the letter.  The letter fails to mention court cases that have upheld the right of  government agencies to place restrictions on commerce in the interest of public health and safety.

The letter on behalf of the WBA was written on law firm Stoel Rives‘ letterhead, and signed by Erin Anderson, (readers can link to her bio on the Stoel Rives website at: https://www.stoel.com/eanderson), a partner at the firm’s Seattle, Washington office.

Stoel Rives LLP, is a business law firm providing corporate and litigation services to a diverse range of clients throughout the U.S. It has approximately 400 attorneys operating out of eleven offices in Alaska, California, Idaho, Minnesota, Oregon, Utah, Washington, and Washington D.C. Stoel Rives is a leader in corporate, energy, environmental, land use, development and construction, natural resources, project development, litigation, and other practice areas.

Below is an excerpt from the overview of Stoel Rives’ Energy Litigation services from their website:

“We help developers, producers and consumers of electricity, oil, natural gas and renewable energy resolve disputes and claims to keep business moving forward. Our cross-discipline team of litigators and trial attorneys is integrated with attorneys across our firm who focus on providing legal counsel to energy businesses. This collaborative approach brings transactional, compliance and defense perspectives to everything we do. When we negotiate an agreement, we optimize it to stand up to future challenges.”

The subject line of the September 27th letter to Deputy Prosecutor Frakes reads, “Moratorium Ordinance; Comprehensive Plan Revision Proposal.” Ms. Anderson stated in the letter: “The comments below are also salient to the underlying action – development of comprehensive plan language prohibiting transshipment of unrefined fossil fuels through Whatcom County – that is to be protected against now by enactment of the moratorium ordinance.” She asked that a copy of the letter be placed in the County’s administrative record being maintained regarding the comprehensive planning effort. So, the letter appears to be aimed at not only the temporary moratorium ordinance, but also at the Cherry Point UGA amendments proposed by County Council member Carl Weimer, to the 2016 Whatcom County Comprehensive (Comp) Plan Update. Those proposed amendments were uncustomarily severed out from the 2016 Comp Plan Update by Council’s July 12th vote, around which, there has been a great deal of controversy.

Meanwhile, it turns out that Stoel Rives is also the law firm that submitted an August 25, 2016 public records request to Whatcom County. 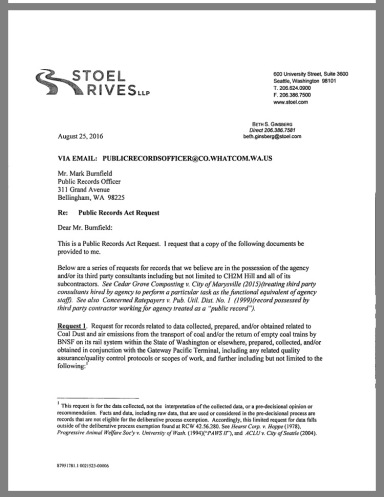 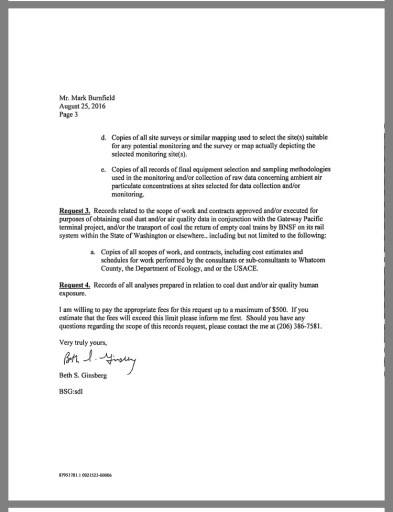 The law firm’s request sought records that Ginsberg wrote in her letter, “we believe are in the possession of the agency and/or its third party consultants including but not limited to CH2M HILL [consultant preparing the Environmental Impact Statement for the GPT project] and all of its subcontractors.”

The request included a “series of requests for records relating to data collected, prepared, and/or obtained related to Coal Dust and air emissions from the transport of coal and/or the return of empty coal trains by BNSF on its rail system within the state of Washington or elsewhere, prepared, collected, and/or obtained in conjunction with the Gateway Pacific Terminal, including any related quality assurance /quality control protocols or scopes of work, and further including but not limited to the following…”

In looking at the 3-page exhaustive records request, one theory as to the identity of Stoel Rives’ mystery client which is seeking the coal dust and air emissions data records from Whatcom County, is that a GPT interest, such as applicant Pacific International Terminals (PIT), or BNSF (applicant for the interrelated Custer Spur Modification Project), hired the law firm to submit the records request on its behalf. Once that unknown entity obtains those coal dust and air emissions data records, it can engage experts to look for something in the methodologies, protocols, standards, collection methods, etc., used in the collection and preparation of the data, with which to try to find some kind of deficiency or weakness in the event that the results from the coal dust and air emissions study are not favorable for the applicants of the GPT and interrelated Custer Spur Modification project. It’s noteworthy that PIT/SSA Marine Vice President Skip Sahlin, testified against the moratorium ordinance during the September 27th Public Hearing.

Regarding the other letter from Stohl Rives, sent to Deputy Prosecutor Frakes on September 27th, in which attorney Erin Anderson suggested the supposed unlawfulness of the temporary moratorium ordinance, even though WBA President Tony Larson, during his public hearing testimony, said the letter was sent on behalf of his organization, it’s possible that PIT could have orchestrated that action.

If PIT did not orchestrate the September 27th Stoel Rives’ letter in which attorney Erin Anderson stated she was writing on behalf of the WBA, another possible orchestrator of that letter could be BP refinery at Cherry Point. At the September 27th County Council meeting, BP Cherry Point Director of NW Govt. & Public Affairs Pam Brady, testified against the temporary moratorium ordinance. Ms. Brady, and at least one environmental consultant doing work for BP, submitted multiple public comments (written and verbal) to the County on the Cherry Point UGA amendments which Council member Carl Weimer had proposed to the 2016 Comp Plan Update, which have been sent to the Whatcom County Planning Commission for review. BP Cherry Point is also listed on the WBA website as a Presidents Club level member of the WBA.

Although, seeing as the August 25th records request submitted to the County regarding the EIS Coal Dust and air emissions analysis was also submitted by Stoel Rives, it could turn out to be a case where both letters coming from the law firm were engineered by the same entity, GPT applicant PIT/SSA Marine.